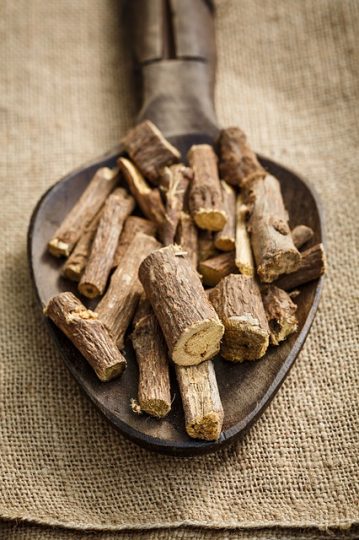 Licorice Has Been Used Throughout History In Many Cultures  Civilizations

Licorice is usually found growing in warmer climates, it is a bushy herb and the “root system” is the part of the plant that is traditionally used for medicinal purposes. When the “Whole Herb” is used, it is beneficial for the Entire Body, such as the adrenal glands, kidneys, liver, stomach, lungs and more. Licorice has anti-inflammatory properties; it is good for fluid retention, headaches, sore throat, and is said to be a modifying, balancing, and harmonizing herb by the Chinese.

Herbs are foods and, as such, deserve responsible moderation and attentiveness.

Licorice is a member of the legume family, which also includes peas and snap beans. Like all legumes, Licorice is capable of fixing nitrogen from the air into the soil, thereby enriching the soil. Fourteen species of Licorice grow throughout the warmer temperate countries of both the new and old worlds. Licorice is a bushy herb growing in heights of 3 feet and widths of 2 to 3 feet. It’s smooth, oval, dark green leaves are paired and give the plant, a fine feathery appearance from a distance. Its flowers bloom June to August. They are pea-shaped, violet-blue, and rise in a spike formation. Licorice’s fruits are small reddish pods, clustered into a prickly seed ball almost 1-inch long.

The roots are made up of vertical tap roots penetrating the soil about 3 to 4 feet, and horizontal rhizomes, or stolon’s, thrown off from the root spreading many feet. The root system is the part of the Licorice plant prized by herbalist and others.

A Little Bit of History of Licorice

The use of Licorice has outlived many civilizations.

Unlike most sweet botanicals, Licorice does not crystallize, nor does it ferment when yeast is added to it. Although much sweeter than sugar, Licorice is said to have the remarkable power to quench thirst, unlike other sweets, which increase thirst. Around 287 B.C. Theophrastus wrote that, with the help of Licorice Root and mare’s milk cheese, Scythians could go 11 to 12 days without drinking.

Around the 15th century, Licorice began to be widely cultivated in Spain and Italy. As it moved up into France and Northern Europe, it acquired the Latin name Liquiritiae, which turned into Lycorys in old French. The Dominican Black Friars introduced it into England, where Lycorys was formed into lozenges call “Pomfrey Cakes,” which were used for throat and lung relief.

“Licorice is familiar to the temperature of our bodies, having a certain binding quality, hot, moist, and sweet.”

“It helps the roughness of the windpipe, hoarseness, diseases in the kidney and bladder. It soothes the stomach and helps difficulty of breathing.”

“The Chinese, who have been using Licorice for thousands of years, consider it one of the safest and most useful herbs. They use it extensively as a modifying, balancing, harmonizing herb in most of their herb combinations.”

The Japanese and Tibetan herbalists believe Licorice acts mainly on the liver. In his book Healing Ourselves, Nabom Muramoto says that Licorice helps the liver discharge the toxins it filters from the blood, and it helps the kidney flush out these toxins. The Chinese also recognize the positive influence Licorice has on the hormonal system.

Today Licorice Root is widely used to feed and support the glands, especially the adrenal glands. And it is commonly used in herb combinations to impart balance.

The medical complex has made use of Licorice to mask nauseous drugs and to enhance many over-the-counter preparations like cough syrups and anti-smoking lozenges.

Licorice is sometimes used to flavor foods. Licorice should not be confused with many of the confections offered today, which contain artificial color, oil of anise, and very little or NO Licorice. Strangely enough, REAL Licorice is NOT BLACK! Genuine Licorice is light brown or mocha colored.

Tobacco product researchers work to isolate Licorice’s “active ingredients” hoping to capitalize on Licorice’s anti-inflammatory and sweetening qualities. Of course, when they isolate the “active ingredients” and work with them in this unbalanced form, side effects are reported, such as fluid retention, headaches, and rise in blood pressure. To my knowledge, the side effects have not been found in studies involving the whole herb, rather, just the isolated components.

Not only did herbalists of old not worry about Licorice causing fluid retention, they, in fact, used it as a diuretic to promote urine flow and to help in a condition called Dropsy, which comes from impaired kidney function. So again, I might make the observation that the whole herb behaves differently from an isolated ingredient.

An analogy would be – hydrogen has been known to cause violent explosions when left uncombined … isolated … in confined space. Water contains hydrogen (H2O), right? So, water is dangerous??? Explosive???

Now I know this analogy is facetious. I’m only using it to call your attention to the fact that THE WHOLE is different from THE PART. Ask yourself when reading a report or study, “Are they basing their findings on the whole, natural plant, or an ingredient isolated from the plant?” If using an isolated ingredient, you can even ask one more question, “Is this isolated ingredient actually from a plant, or is it a synthetic reproduction of the original made from petrochemicals?”

In the Natural Healing newsletter, VOL. 3, No. 3, page 6, Dr. Christopher says, that in some of the experiments conducted, Licorice is reported to [cause] sodium retention in normal individuals. But, the conductors of these experiments used the isolated active principle  – Glyrrhetic acid – instead of the herb in its WHOLEsome state … We thank the Good Lord that we are not afraid to use Licorice in its whole state.

When discussing Licorice, Australian herbalist Dorothy Hall says, “Glycyrrhizin is the ‘active principle’ beloved of pharmacy. It gives the herb its sweetish taste and its energy-boosting action. The whole herb contains much more than just glycyrrhizin. It also contains iron, some sulphur, potassium, and calcium. It is a laxative, demulcent, tonic, stimulatory and alterative. One of the safest and most commonly used herbs worldwide, it is astounding to find that some evaluation committees are trying to portray it as ‘dangerous,’ restricting it to various poisons schedules, and therefore medicinally available only from retail pharmacies! All herbalists would be laughing in disbelief if the game was not so deadly serious.”

Herbs are foods and, as such, deserve responsible moderation and attentiveness. However, I don’t think Licorice Root’s long, reputable history will suffer much from fragmented research studies when so many …

REAL people … Have benefited from the … REAL herb.